Click Here to discover our luxury properties for Less than 1m

How much Luxury Real Estate 1M can buy in DR

In Knight Frank’s Wealth Report 2017, the international real estate consultancy looks at how many square metres of luxury home $1 million (in US funds) can net buyers around the world.

Because those of us north of the border have yet to adopt the greenback as the national currency, BuzzBuzzNews asked Knight Frank’s research department to rerun the numbers in Canadian dollars.

Calculations are based on estimated luxury residential values in 20 prime markets last year and exchange rates as of 2016’s end. Knight Frank considers prime property to be in the top 5 per cent of a market, generally.

“We ask our teams to produce a basket of properties which they think reflect ‘prime’ in their market,” says Kate Everett-Allen, a Knight Frank researcher.

“For example, for a number of the Asia cities, the properties are mainly new-build condominiums whereas in London there is a mix of resales and new-build properties, some townhouses, some apartments,” she explains.

A million dollars in Monaco’s luxury housing market will get you a cozy 13 square metres, or about 139 square feet — not much, even by micro-apartment standards.

“Since we started this exercise six years ago, Monaco has held on to the top spot — and values have remained largely static,” the Wealth Report 2017 states.

Buyers in Hong Kong will be similarly cramped as their Monaco counterparts: $1 million will buy 15 square metres, roughly 161 square feet.

Those four cities “jostle for position each year,” according to Knight Frank’s report, which calls the gap between these locales and other markets “significant.”

The Canadian dollar goes a lot further in Cape Town, where, for a cool million, 156 square metres (1,679 square feet) can be had — the most of any market on the list.

Sao Paulo and Dubai are the only other markets Frank Knight identified as offering more than 100 metres at that price point.

Knight Frank did not analyze Toronto’s upscale residential real estate market in these terms. So BuzzBuzzNews asked a leading Toronto-based real estate analyst to gauge the city’s luxury condo market, including both new and resale condos.

“One million dollars would get you 1,000 square feet,” estimates Shaun Hildebrand, senior vice president of Urbanation, which tracks the Toronto condo market.

He says $1,000 per square foot is good “benchmark” for the city’s luxury condo market.

Hildebrand also drilled down into upscale transactions in Toronto’s Yorkville neighbourhood, the stomping grounds for some of the country’s wealthiest.

Well, it’s cheaper than Monaco. See how far the Canadian dollar goes in all 20 prime global real estate markets below: 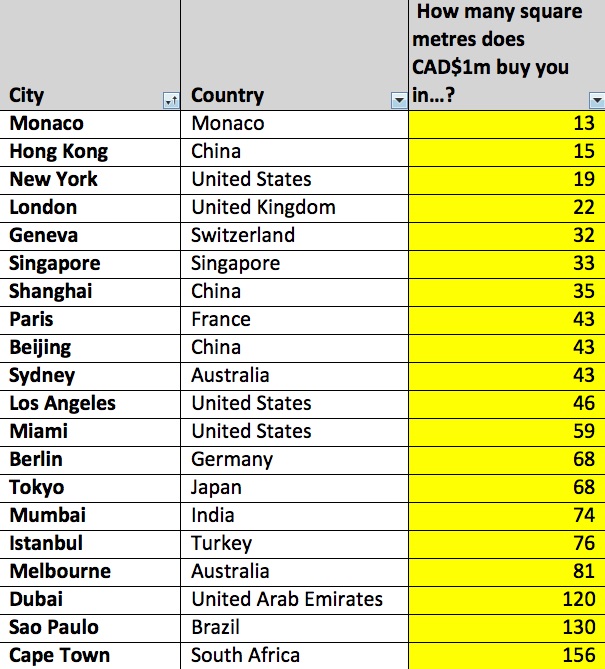 Notes: Price ranges for Hong Kong, Beijing and Shanghai are for properties considered “super-prime.” Prices used in the calculation for Hong Kong are based on apartments only. All currency calculations are based on the prevailing rate on 30 December 2016 (last trading day). 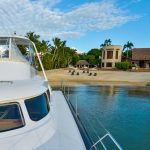 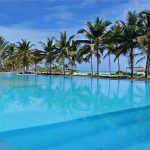 On the beach destinations for Spring Break!