January 14, 2016 in Christies, Educational, In the Press, People, Ultra-Rich and HNWIs

Both Sotheby’s and its main rival, Christie’s, have real estate ties – Christie’s via affiliated firms like Brown Harris Stevens in New York, and Sotheby’s through wholly-owned offices as well as affiliated brokerages. These affiliations are touted by property brokerage chiefs as an elite referral network that can generate buyer and seller leads and result in lucrative property sales.

With political and economic instability on the rise worldwide, New York City’s relative stability is attracting growing investor interest. Prices in the city’s luxury residential market jumped 18.8 percent in 2014, the largest gain among so-called “world cities,” according to Knight Frank data. A growing pool of foreign money played a significant part in this appreciation, and local brokerages, anxious to increase their visibility with foreign buyers, are looking to strike partnerships across the country and abroad.

It’s still unclear, however, if these relationships translate into what matters — commissions. Some critics go a step further, saying touting such alliances can be misleading to consumers, who may believe a brokerage’s global network or auction-house affiliation will help their properties sell faster, or for a higher price.

I. A package deal: The auction house model

Sotheby’s founded Sotheby’s International Realty in 1976 as a service for clients, but sold the real estate division for $100 million in 2004 to Realogy Holdings, the parent company of firms such as the Corcoran Group and Citi Habitats.

In addition to acquiring the brokerage operation, Realogy entered a 100-year licensing agreement with Sotheby’s to open real estate franchises using the auction house name. Realogy pays Sotheby’s 9.5 percent of the net royalties it receives from franchisees – or a minimum of $2 million a year, according to Realogy’s most recent annual report. Today, Realogy owns 43 Sotheby’s offices, including one in New York City, and it franchises more than 780. The two segments sold $70 billion worth of real estate in 2014.

Client referrals from the auction house put agents “face-to-face with a qualified audience,” she said, “because so many ultra-high net worth individuals have a personal passion for art.”

Many others, including BlackRock’s CEO Larry Fink, believe that art and real estate are where all the big money goes to play.

But does purchasing fine art through your preferred auction house make you more likely to turn to it for property advice? That’s a tricky question. Korte declined to disclose the number of listings referred by the Sotheby’s auction house, but said there were “many,” including properties priced up to $95 million. She mentioned three successful referral deals, which led to sales of a $39.5 million Greenwich waterfront home, an $8 million Manhattan townhouse, and a $17 million estate in Sands Point, Long Island.

Unlike with Sotheby’s, Christie’s International Real Estate is a brokerage network that’s wholly-owned by the auction house. Local brokerages such as Brown Harris Stevens, which is the Christie’s affiliate in New York City, the Hamptons and Palm Beach pay a fee to be the exclusive affiliate in a specific market. The 138-firm network has combined annual sales between $100 billion and $125 billion.

Brokerages sign one- to three-year contracts with Christie’s to use its name but also to tap into a “true referral and marketing network,” BHS’ Willkie told The Real Deal. His firm can advertise in Christie’s brochures and even in its lobby at Rockefeller Center, which showcases properties being sold by Christie’s affiliates.

“It’s a marketing venue for us, and it’s a great one,” Willkie said. BHS can also earn money — a standard 35 percent of commission — by referring clients to another Christie’s affiliate.These privileges come with a slew of fees, however.

Sources said BHS pays millions of dollars each year to tap into the Christie’s network, on top of listing-specific advertising costs.

“It’s worth it,” Willkie said. “It’s hard to always pinpoint, but it brings specific business.” He emphasized that Christie’s seal of approval can boost a property’s value, explaining it thus: “If I were going to sell you a diamond necklace, if I pull it out of my pocket or if I take you to Harry Winston and it’s in a velvet box, it commands a higher price. There is provenance.”

Realogy licenses out the Sotheby’s name to more than 700 brokerages across the country. But not all its affiliates embody the luxury lifestyle. A Sotheby’s-affiliated brokerage in New Hampshire, for example, includes listings for trailer homes on its website. Licensing Sotheby’s name so widely “did alter the exclusivity of the brand,” Willkie said.

II. Friends of ours: Strategic alliances

Even those firms avoiding the auction house route are looking at partnerships that will help them court foreign buyers. That’s especially true in the luxury and super-luxury markets, where demand may be falling short of supply.

“If you’re selling a $20 million to $50 million property, you cannot just market to the domestic high-net worth market,” said David Friedman, president of Wealth-X, which tracks ultra-high-net-worth individuals. “To win business, brokerages have to show they won’t be constrained in marketing to the U.S., but will look at a global investment platform.”

“The global real estate buyer is starting to look in multiple markets,” said Richard Jordan, Elliman’s senior vice president of global markets, who in the past 12 months logged 700,000 miles and visited 37 cities worldwide in order to build up the Elliman-Knight Frank network. “It’s important to realize that and realize that a lot of our client base has assets all over the world. Why would we not want to take care of our clients no matter what market they’re looking at?” Even Jed Garfield, owner of Leslie J. Garfield & Co, who said 90 percent of his clients are still domestic, agreed that it’s important for a brokerage to be thought of as having global reach.

“Our clients on the sale side want to know that they’re reaching every possible potential purchaser,” he said. “Otherwise, it gives people a reason not to hire me.”

Garfield and Beauchamp will evenly split the commission on shared deals. As of November, Garfield was working on four New York deals with Beauchamp customers.

Siegel, however, challenged the notion that a strategic alliance or affiliation – let alone a partnership with Sotheby’s or Christie’s – makes a firm “international.”

“The optics are that you have access to the international market, and the companies use it to secure listings,” he said. “But their access to the market and their brand recognition and true referral business is diminished.”

“We are very focused on creating a local brokerage business, but the real estate market has become very global,” White said. “For us to build the kind of business that we want to build, we have to be in the markets that are generating referrals across these international boundaries.

Standard fees for referral networks can range from 20 percent to 35 percent of the commission, sources told TRD.

But firms are tight-lipped about how much business they are getting. “It’s very nebulous,” said one brokerage head whose firm had a tryst with a European partner a decade ago. Maitland said the alliance between Town and Fortune – which includes shared marketing costs – resulted in more than $140 million in sales volume within the first six months. If the alliance contributes more than 5 percent to Town’s annual sales, she said she’d consider it “very successful.”

Diane Ramirez, CEO of Halstead Property, estimated that up to 15 percent of her firm’s business comes through its referral network, which includes U.K.-based Mayfair International Realty, Leading Real Estate Companies of the World, a membership-based network of around 500 brokerages worldwide, and Luxury Portfolio, the network’s luxury arm. She declined to disclose membership dues.

In the ultra-competitive residential market, agents are all too pleased to trumpet the relationships – whether or not they’ve actually paid off.

“We would not continue to be investing if it wasn’t working.” —Elliman’s Richard Jordan

At least a dozen agents who joined Elliman over the past year singled out the firm’s alliance with Knight Frank – or Elliman’s new global reach – as a decisive factor. In November, Roger Erickson joining Elliman from Sotheby’s would give him “the resources of the leading residential agency in New York and London… and a brokerage network which extends both domestically and internationally.”

Elliman’s Jordan declined to disclose the volume of deals that came through the Knight Frank alliance, other than to say it was “significant,” with properties ranging from $500,000 to $25 million.

“Of course it’s a revenue model,” he said. “We would not continue to be investing if it wasn’t working.”

Like BHS and Christie’s, Stribling & Associates pays a fee to be an affiliate of global real estate firm Savills. (The two formed a partnership in 2010.)

“It’s not inexpensive, but it’s worth it,” said Kirk Henckels, a vice chairman at Stribling, who declined to disclose the actual amount. (Along with Stribling, Savills is affiliated with San Francisco-based residential brokerage McGuire Real Estate and The Agency in Los Angeles.) From left: Nikki Field and the Lake Tahoe estate

Field said 48 percent of her business last year came from referrals outside New York, via the auction house or brokerage network.

“It’s a very lucrative additional income opportunity for residential real estate brokers if they have this connection to international sales,” she said.

But even if the revenue stream for brokerage alliances seems ill-defined, agents and real estate executives said the relationships provide powerful branding.

“It’s important that everyone has international and national connections because the world is very small. But in the end, real estate is local,” said Braddock. “I will go to my grave saying that.”

The Playboy Mansion for sale by Christie’s International Real Estate 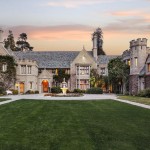 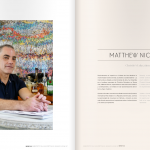