July 18, 2019 in Golf, In the Press, Lifestyles, Luxury Real Estate in the Dominican Republic, People, Ultra-Rich and HNWIs, Vacations

Once again, the former president of the United States, Bill Clinton, has opted for his favorite vacation retreat in the Caribbean: Punta Cana. With the Rainieri as hosts, Clinton has not delayed in enjoying the golf course of Punta Cana Resorts, and after his arrival this Wednesday has been seen playing along with Frank Elias Rainieri and other companions of the charms of that sport.

Before the exmandatario visit, the Dominican ambassador in the United States, José Tomás Pérez, through his Twitter account, wrote the following message: “Welcome Bill Clinton to the Dominican Republic. Your presence is the best message to Americans and the world about the safety and quality of our tourism. ”

With certain frequency the American politician usually travels to the country to spend his days of rest. The last time he did it was in February 2018, accompanied by his wife @HillaryClinton

The visit of Clinton, who held the presidency of the United States between 1993-2001, confirms that the destination is a safe area, contrary to what many international media have assured.

On this occasion, as at other times, @TortugaBay is the refuge where Clinton rests, and it is no wonder it is a tourist resort with the highest standards of quality and service, but above all very discreet.

Upon his arrival in the tourist zone, Clinton wore a blue jacket and a red shirt. Those present at the place took the opportunity to take pictures with him. 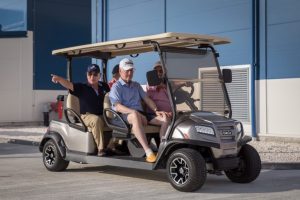 Former US president, Bill Clinton, on Wed also visited the Punta Cana Macao Energy Consortium -CEPM-, to learn about the infrastructure and the innovative technology that supports the efficiency and guarantee of energy supply in the eastern part of the country, specifically in Bávaro, Verón, Nisibón, Miches and Punta Cana, in eastern La Altagracia.

“CEPM is the most important investment of energy solutions in the East Zone of the Dominican Republic, with an amount exceeding $680 million dollars,” the power company said in a statement.